Below are brief summaries of puzzles currently being analyzed, and their current status. For discussion, seen the talk page, or the community discussion forum threads.

Seemingly the "solution" to the Simple and Direct puzzle is now an unsolved puzzle itself.

There have been hints of patterns in Color References.

The end of the video shows the letters R-RMRR AI 3 .A23 (including the spaces) (direct link)

Leave this in the book &
return it. 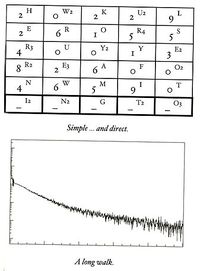 This is a phrase used at the begining of the promotional video and later correspondence with MTC [citation?].